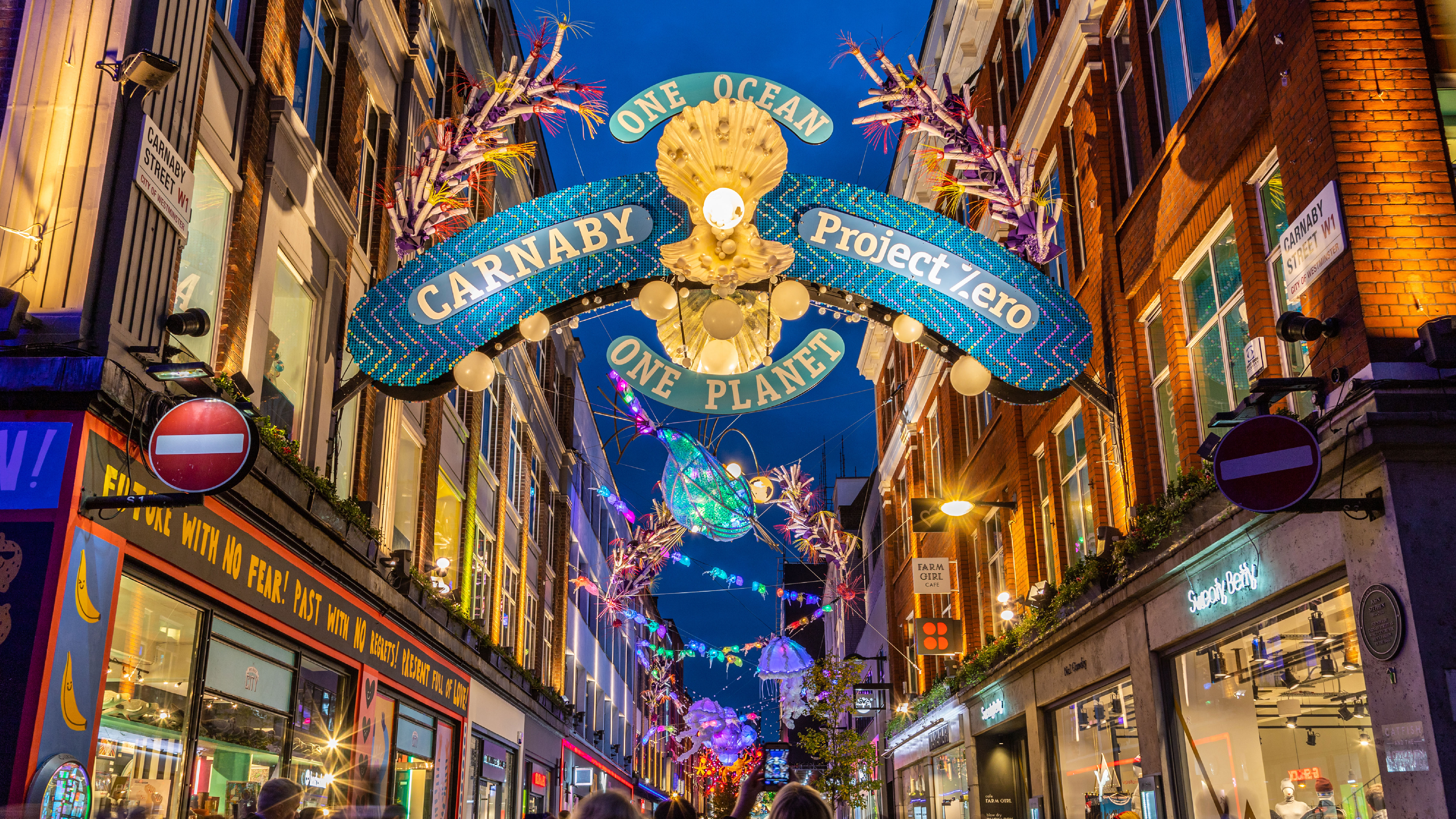 How Christmas decorations are adapting to a modern audience

I am Ruby Arenson, Foster + Baylis’s newest Account Manager. As a resident grinch with an unnecessarily cynical outlook on Christmas, I thought I should try and muster up some Christmas spirit this year. I spent the best part of an hour debating how best to do so and finally came to the brilliant conclusion that Christmas shopping on Oxford Street in the middle of November was a clever thing to do. After shoving numerous tourists out of my way and nearly getting into a scuffle with a tour group leader, I decided the shops were far too manic. Instead I opted for window shopping, which allowed me to view London’s Christmas displays from a safe distance.

As expected, the bigger retailers had invested in overly elaborate displays to draw in crowds. However, it wasn’t these displays that caught my attention. I was enticed by shops that were using their displays for a more altruistic purpose, either to promote charitable causes or to remind consumers to shop in a more environmentally friendly way. In this piece I have looked into the changing attitudes of brands and retailers and have focused on the impact this has had on their Christmas displays.

Some big retailers surprised me with their sustainable efforts. At first glance, Stella McCartney’s festive display appears to be environmentally damaging, as it contains an inordinate amount of lights and is fully lit throughout the day and night. Approaching the store with caution, I realised my preconceptions of the brand were incorrect, as the display is powered through renewable sources of energy. Carnaby Street have also created an environmental display through their partnership with ocean conservation charity ‘Project Zero’. Their light installation features an underwater theme, and is made up of repurposed fishing netting, pre-used bubble wrap and over 1,500 recycled plastic bottles. The display also utilises fully renewable sources of power. It is significant that larger brands have incorporated sustainability into their Christmas displays, and hopefully will encourage other big names to follow suit. 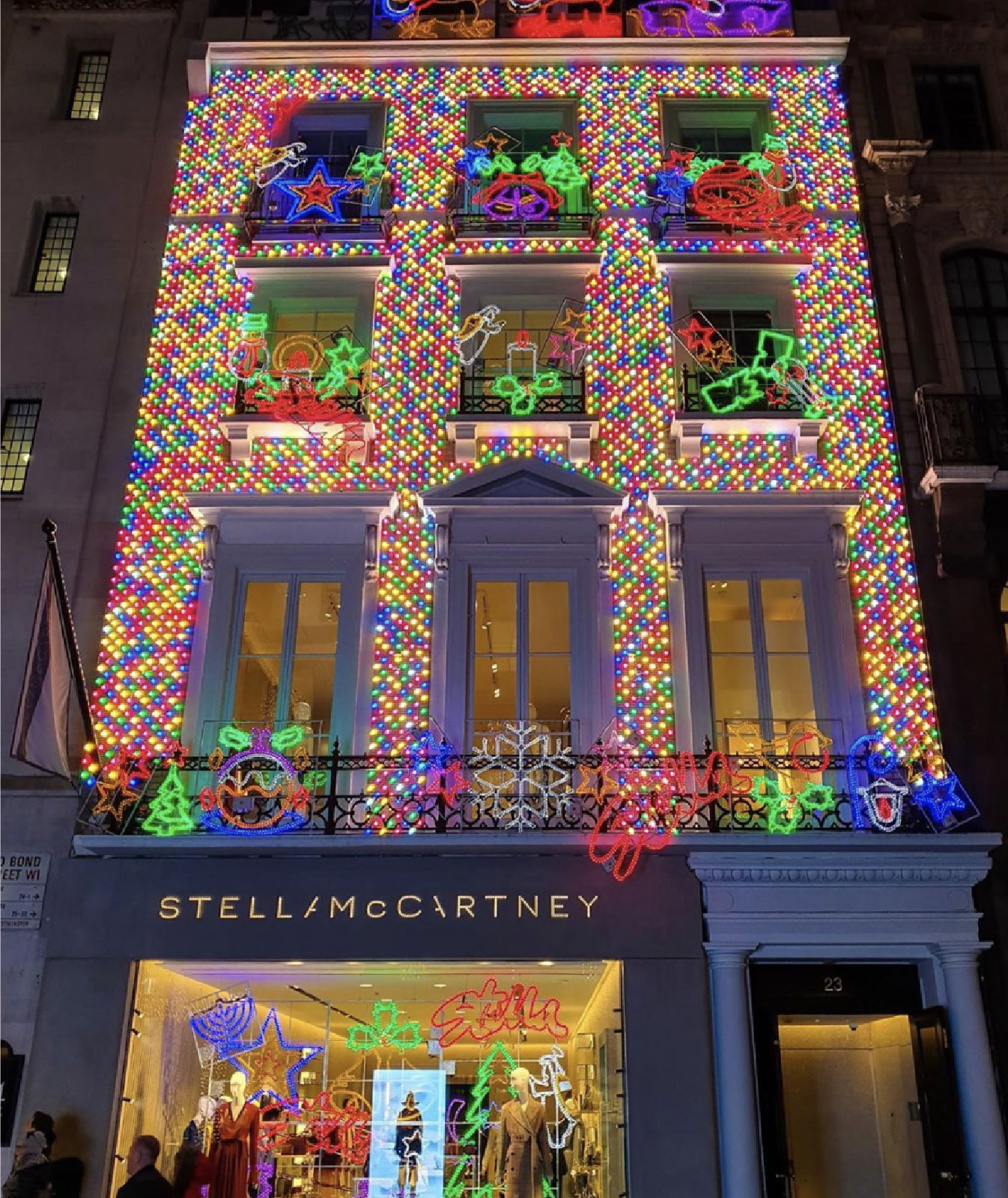 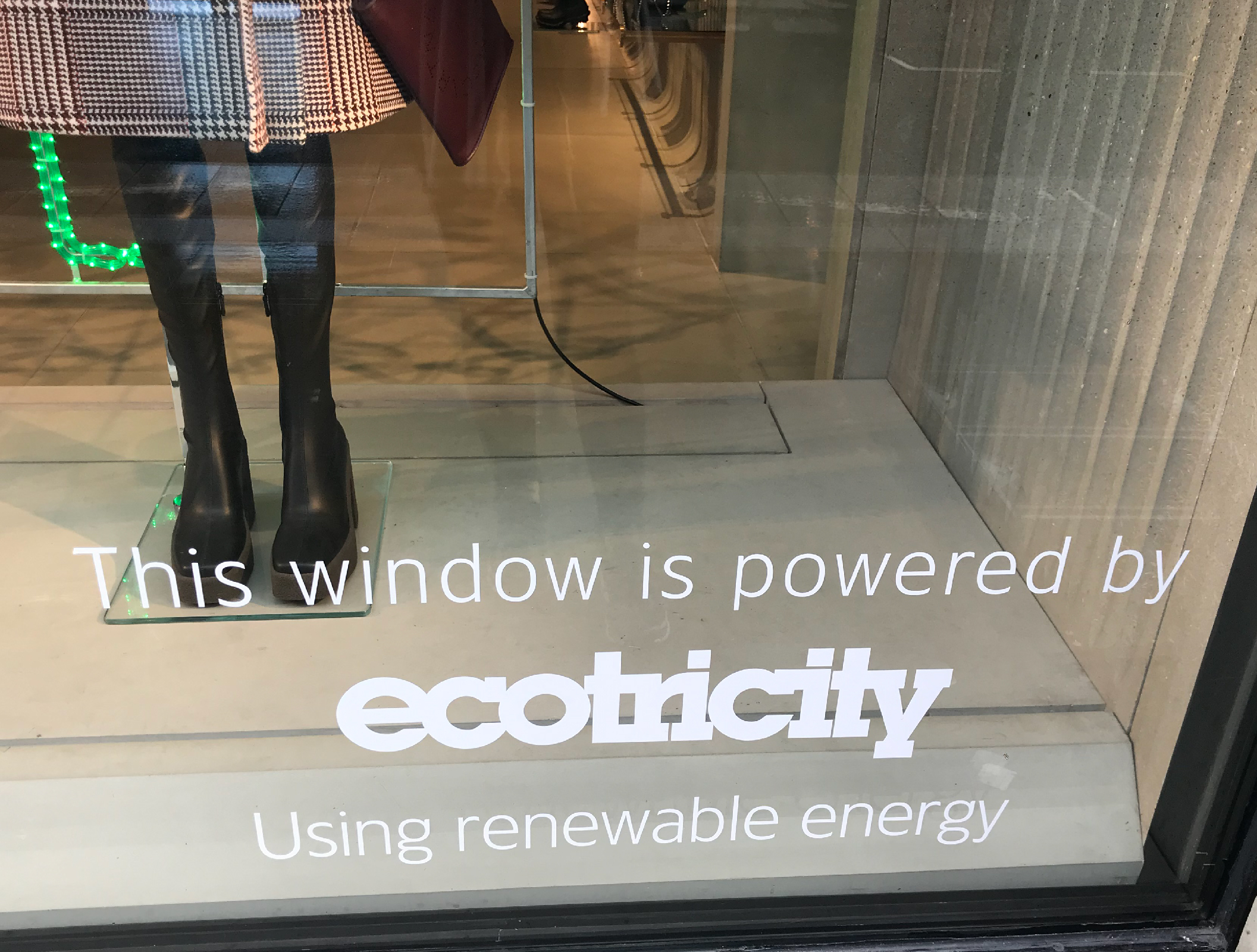 The ‘throw away’ culture that currently exists in the United Kingdom is in the process of being dismantled. This is largely due to recent research into fast fashion, which has exposed the industry as a negative contributor to the environment. Ever since, consumers have been encouraged to shop more cautiously, prioritising quality over quantity. Some brands have reflected this shift in behaviour in the language they use in their campaigns. Sunglass Hut has used their window display to promote a ‘Year-Long Gift’. Aveda’s window display endorses ‘Gift[ing] with Purpose’.

These shops are trying to discourage buying gifts for the sake of it, a practice that occurs frequently around Christmas time, and are instead endorsing thoughtful giving. 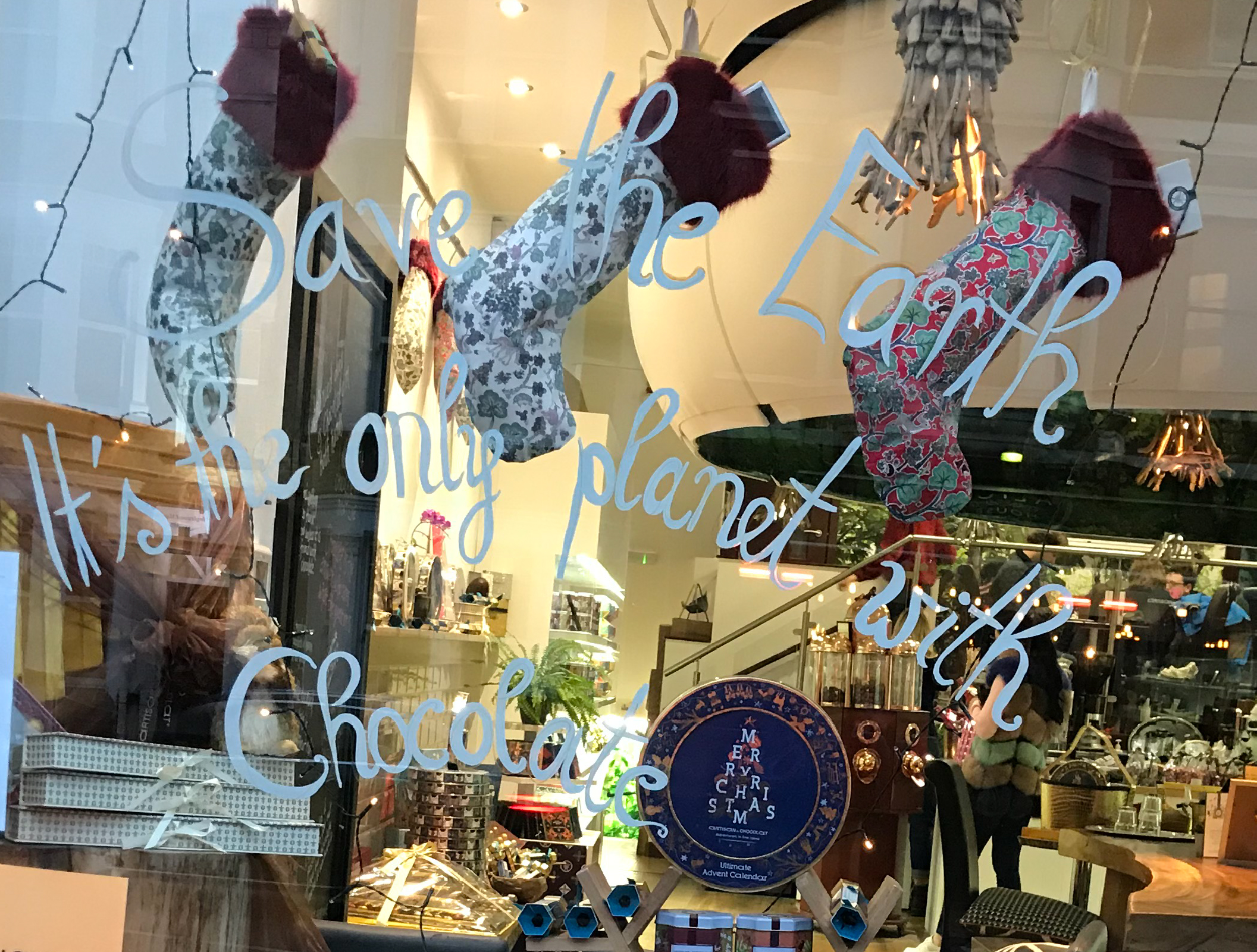 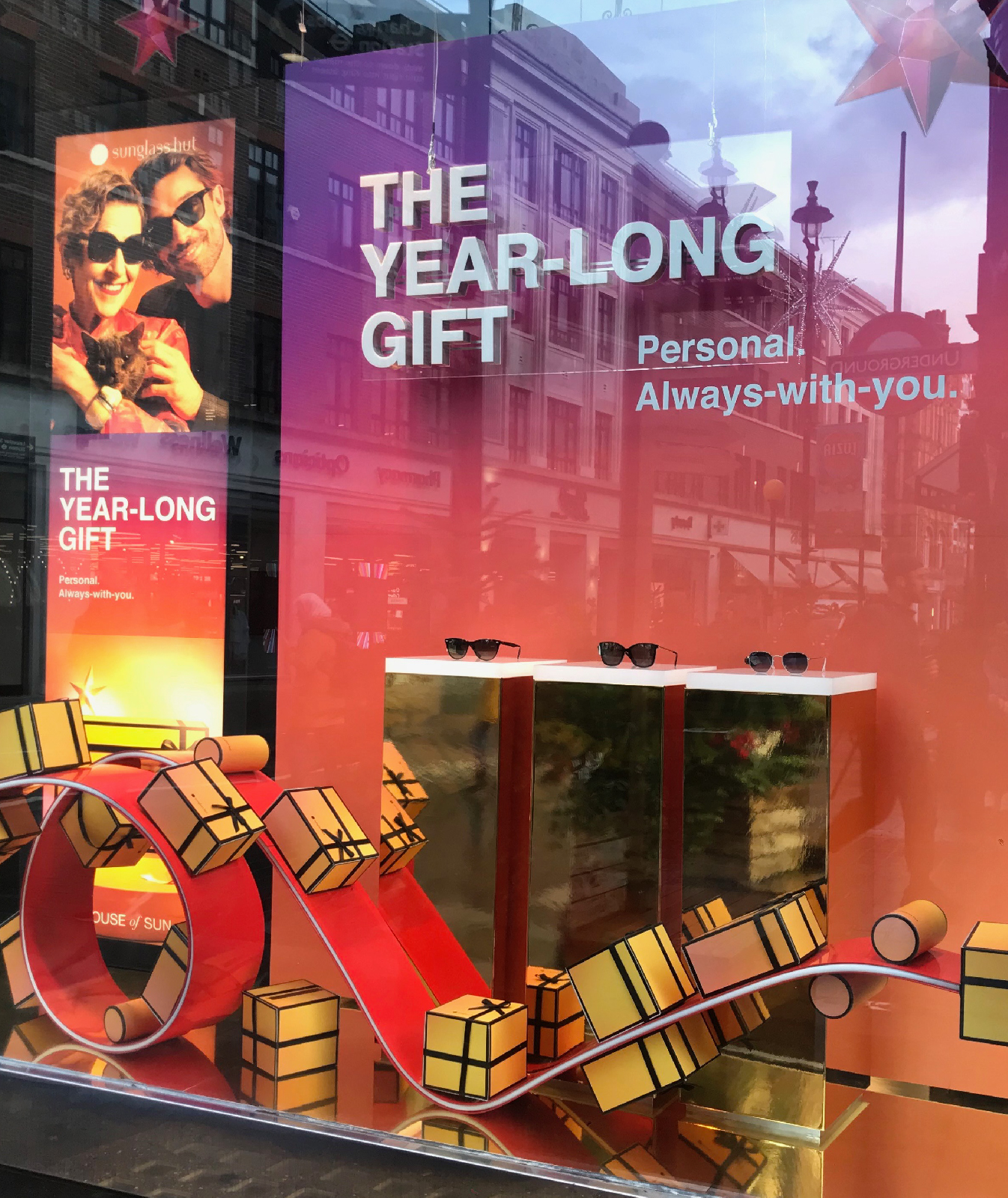 As my desire to shop became stronger and my willpower dwindled, I decided to leave Central London and continue my hunt elsewhere. I found a variety of window displays that were being used to promote social causes. Artisan Du Chocolat includes traditional Christmas decorations with the words, ‘Save the Earth it’s the only planet with Chocolate’ painted across the front of the window. Paperchase shows shoppers that each christmas card they sell has a proportion of its profits donated to charity. Whistles in Guildford (I know not technically London… but it worked so well with the theme) has devoted their display to Goldfinger Factory. Goldfinger are a design studio that has won awards for their sustainable and social enterprises. They transform waste materials into creative products. 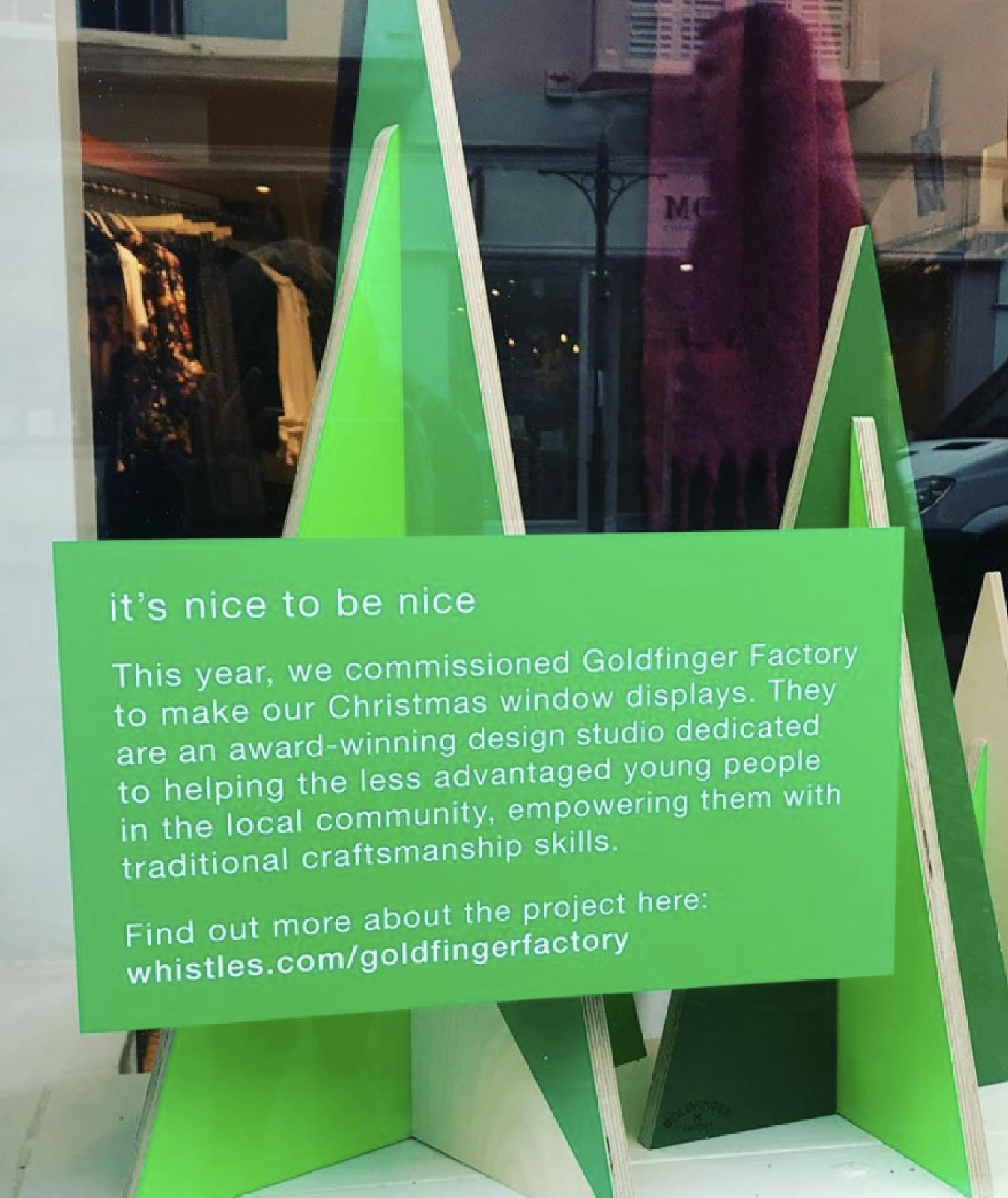 My day of window-shopping was successful in challenging my negative perceptions of Christmas. Previously I had seen Christmas decorations as a purely materialistic effort. These retailers have sacrificed their windows for better causes, and as the world becomes more environmentally and socially aware, I am excited to see an influx of similar displays in the future.